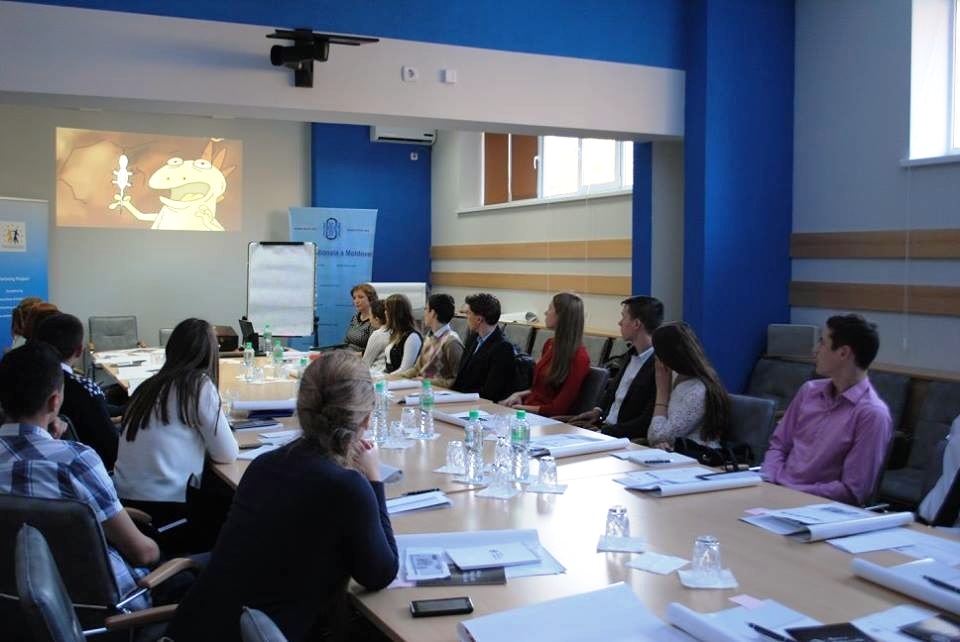 The Development Facility of the European Fund for Southeast Europe (EFSE DF), in cooperation with the National Bank of Moldova, organised several financial literacy workshops for schoolchildren and teachers in the context of World Savings Day. Targeted at pupils ages 10-16, the workshops, which took place on 27 and 28 October 2015, explained key financial concepts in an accessible and playful manner. The tools used plain language and various media, e.g. games and quizzes, to familiarise teenagers and young adults with the interrelationships between earning, spending and saving.
The workshop for teachers addressed the ways in which core thematic aspects of saving can be communicated to pupils. In addition, teachers were provided with useful tools for enhancing financial literacy along with hands-on group exercises, role-playing games, videos and course-related training materials.
"A sound financial education is the basis for making sound financial decisions as an adult,” explains Markus Aschendorf, Chairperson of the EFSE Development Facility the importance of these workshops. "As a strong advocate of responsible finance, we see the support of the sector organisations in our target countries as a very important pillar of our work.”
"The engagement of the National Bank of Moldova in financial education, which we consider to be a highly responsible process, implies a disseminating effect at the level of various target groups, which we would like to see spreading over the whole society,” adds Marin Moloşag, First Deputy Governor of the National Bank of Moldova.
The World Savings Day, which celebrates its 90th anniversary 31 October 2015, was inaugurated in 1925 to motivate people all over the world to deposit their money in a bank rather than store it at home. Besides the joint workshops organised in cooperation with the EFSE DF, the National Bank of Moldova sponsors different events in Moldova around this day, including dedicated workshops, aimed at building an inclusive financial sector whilst increasing overall financial literacy level in the population with a strong focus on the young generation.
About the EFSE DF
The Development Facility of the European Fund for Southeast Europe (EFSE DF) was created in 2006 to support the EFSE’s development finance mandate. Its mission is to deploy effective, targeted and innovative technical assistance to maximise the impact and outreach of the Fund’s development finance mandate in its target countries. The capacity-building services of the EFSE DF encompass capacity building and training, financial sector support as well as applied research with the aim to strengthen the internal capacities and operations of the Fund’s partner lending institutions.
The EFSE DF operates independently from the Fund in a fiduciary arrangement under Luxembourg law. The DFC (Development Facility Committee) comprising members from KfW Development Bank (KfW), the Swiss Agency for Development and Cooperation (SDC), the Development Bank of Austria (Oesterreichische Entwicklungsbank – OeEB) and the Netherlands Finance Company (FMO) is responsible for assessing and approving all project proposals and provides strategic guidance to the EFSE DF.
About the European Fund for Southeast Europe
The European Fund for Southeast Europe (EFSE) was initiated by KfW Development Bank (KfW) with the financial support of the German Federal Ministry for Economic Cooperation and Development (BMZ) and the European Commission. It aims to foster economic development and prosperity in Albania, Armenia, Azerbaijan, Belarus, Bosnia and Herzegovina, Bulgaria, Croatia, former Yugoslav Republic of Macedonia, Kosovo, Georgia, Moldova, Montenegro, Romania, Serbia, Ukraine and Turkey. As access to finance is a key success factor in developing the micro, small and medium enterprise segments, the EFSE focuses on assisting local financial sectors in strengthening their ability to ensure adequate and sustainable financing. The funding the EFSE provides as long-term finance primarily for micro and small enterprises (MSEs) – but also for private households in the form of home improvement loans – is channelled to these loan customers through local partner lending institutions. Supporting the EFSE’s investment activities is the EFSE Development Facility, which provides partner lending institutions with technical assistance, consulting and training services to build operational capacities and professional management.
Initiated by KfW Development Bank (KfW) on 15 December 2005 from four multi-donor programs under its management, the EFSE is the first public-private partnership of its kind and the first privately managed fund in development finance to leverage private funding for MSE finance in the target region. Capital is provided by donor agencies, international financial institutions and private institutional investors, including the German Federal Ministry for Economic Cooperation and Development (BMZ), the European Commission (EC), the Government of Albania, Small and Medium Business Credit Support CJSC (SMBCS), a subsidiary of the Central Bank of Armenia, the Development Bank of Austria (Oesterreichische Entwicklungsbank - OeEB), the Swiss Agency for Development and Cooperation (SDC), the Danish International Development Agency (Danida), KfW as Lead Investor, the International Finance Corporation (IFC), the Netherlands Finance Company (FMO), the European Bank for Reconstruction and Development (EBRD), the European Investment Bank (EIB), Sal. Oppenheim and Deutsche Bank.
Oppenheim Asset Management Services S.à r.l., Luxembourg, and Finance in Motion GmbH, Germany, are, respectively, the EFSE’s Fund Manager and Fund Advisor.
For more information about the European Fund for Southeast Europe, please visit: http://www.efse.lu/
About the National Bank of Moldova
National Bank of Moldova (NBM) was established by Presidential Decree of the Republic of Moldova on 4 June 1991. The primary objective of the National Bank of Moldova is to achieve and maintain price stability.
The main duties of the Bank include: